TripAdvisor shows it can be a friend but also an enemy!

Well it had to happen! With 41 5 star reviews on tripadvisor G2 have been the no.1 top rated for things to do in Aviemore for over 3 years and we have occasionally been No.1 in Scotland. 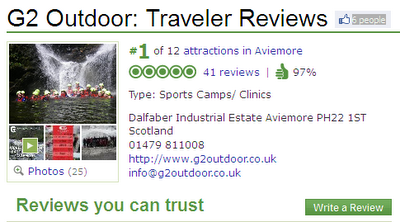 However we have just received our first negative review which is a 1 star review? 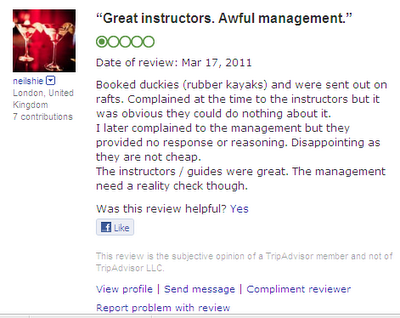 Confused? well we are! As:-


a) We don’t call our inflatables Duckies we call them mini-rafts or canoes.
b) We’ve never had anyone complain?
c) The Instructors are the management and we received no complaints.


We have been fake reviewed or the reviewer got the wrong company (there is another company in the area that calls them duckies).

The word “Duckie” tends to be an inside industry name hence the reviewer maybe a rival company or the reviewer has genuinely got the wrong company.


The Instructors are the management and and at no point has anyone complained ever! never mind about something specific as being put in rafts rather than duckies.


So why would another company do this?


TripAdvisor is linked to google rankings and those companies with good tripadvisor reviews will be ranked higher than those with fewer reviews and at the end of the day google is the king of advertising.


Most travelers are getting pretty savvy with checking out reviews before they go on holiday and by giving companies bad reviews this will put people off.

I suppose Jealousy is a form of flattery!

This site uses Akismet to reduce spam. Learn how your comment data is processed.